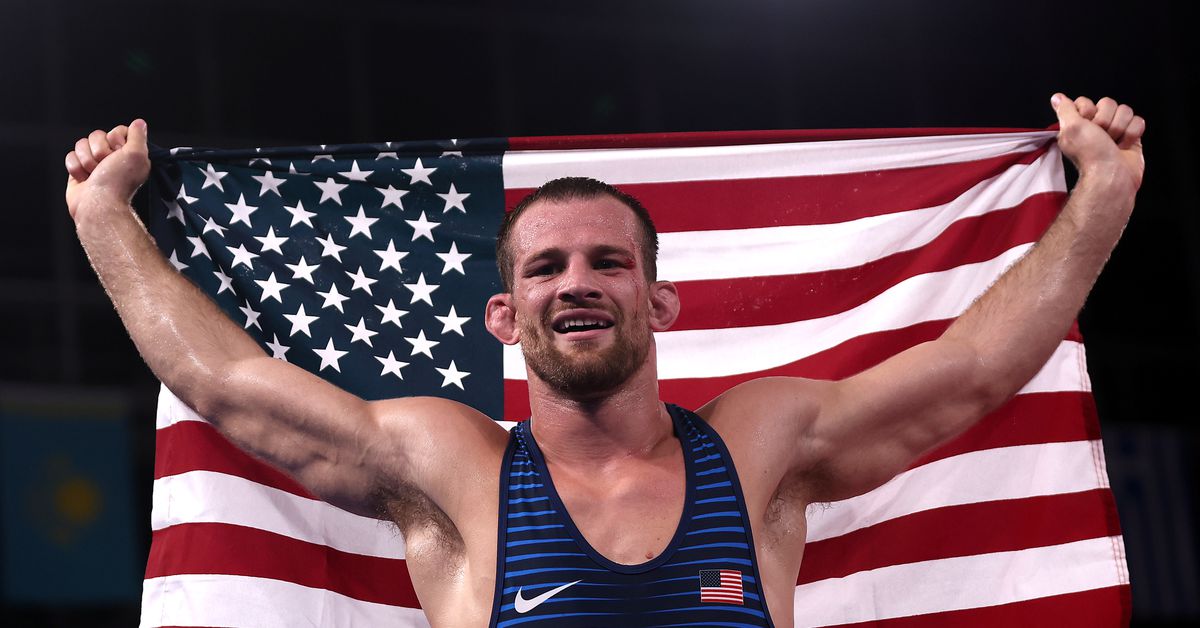 For the first time, Olympic gold medalist David Taylor is contemplating a potential move into MMA.

After attending UFC 281 this past Saturday, the 31-year-old Penn State alum said fighting is something he might want to explore.

That isn’t something Taylor would have said a couple of years ago. While no decision has been made, he is intrigued by the possibility, especially knowing how much his wrestling pedigree could help him make the transition.

“I think in the sport of wrestling, I’ve accomplished everything I’ve wanted to accomplish,” Taylor explained on The MMA Hour. “Winning a second Olympic gold medal in Paris in 2024 is top priority.

“But if I want to pursue being the best combat athlete of all time, stepping in the octagon is something that would have to happen. Is that going to happen? I don’t know yet, but I’m definitely considering it more than I’ve ever considered it before.”

Taylor is widely considered one of the top wrestlers in the U.S. after he captured a gold medal at the 2020 Olympic games. He’s also a three-time gold medalist at the World Championships in addition to two NCAA championships and becoming a four-time All-American at Penn State.

That said, Taylor understands that wrestling is not fighting, which is part of the reason why he’s not just jumping head first into the sport without thinking about his long-term future.

“If that’s the step that I want to take, you understand what you’re up against,” Taylor said. “You understand people have been doing this their whole entire life. It’s no joke.

“It’s a livelihood. It’s a profession, but I’ve been competing at the highest level my whole life and when it comes down to being a competitor, I’ll better myself every single time. It’s just a matter of if that’s a decision that I make, it will be the best. It could be something that’s really exciting but again, it’s a different world. There’s definitely different risks assessed with it but there’s a lot of reward as well.”

Wrestling has arguably served as the best foundation to learn MMA with a long list of champions and top contenders coming from the discipline.

As much as wrestling might give him the perfect launching pad to get into fighting, Taylor acknowledges there’s no way to truly prepare for the kind of damage that can be inflicted in MMA, and that’s far different from his current sport of choice.

“From a combat sports standpoint, wrestlers can make that transition and do really well,” Taylor said. “But it’s a definitely a different path. You’ve got an understanding when you walk in an arena, some people go and celebrate with their family, some go to the hospital. In wrestling, that’s not the case. Worst-case scenario, you get taken down, you get beat. You’re not beaten. Your ego hurts, You’re frustrated but you just regroup and you can wrestle the next day if you want.

“Fighting’s a different world with that kind of stuff. I think it definitely takes a different mentality and have a really clear purpose for those that decide to go that route.”

If Taylor makes the U.S. Olympic team to compete at the 2024 games in Paris, he will be just a few months shy of his 34th birthday, which means time will not be on his side if he opts to pursue a career in MMA.

There are definitely examples of fighters who made the move into MMA at a later age; two-time Olympian Daniel Cormier tops that list of names. But even then Cormier transitioned into fighting when he was 31, which gave him a three-year advantage over Taylor.

Taylor has no doubts that he could make an impact in the sport if that’s the career path he chooses. But he won’t know anything for certain until after 2024.

“Wrestling is an amazing sport, but it’s a niche sport,” Taylor said. “Whereas MMA is something that’s viewed all around the world. I think that your competitive juices get flowing. Like OK, this is kind of next level. It’s exciting.

“As a competitor, you want to seek out and you want to be the best. In wrestling, I’ve done that. Now how many more times can you continue doing that again? I could see if that was a path that I chose, it’s something new and exciting. It’s a new task. It’s something new. You can be reinvigorated. You’d be chasing greatness and that’s something that interests me.”

The MMA Hour with Tyson Fury – Alex Pereira, Larissa Pacheco and Brendan Loughnane all in studio – and Jan Blachowicz

Adesanya hoping to headline UFC Africa in 2023: ‘Game ain’t over’

The MMA Hour with Tyson Fury – Alex Pereira, Larissa Pacheco and Brendan Loughnane all in studio – and Jan Blachowicz

Adesanya hoping to headline UFC Africa in 2023: ‘Game ain’t over’