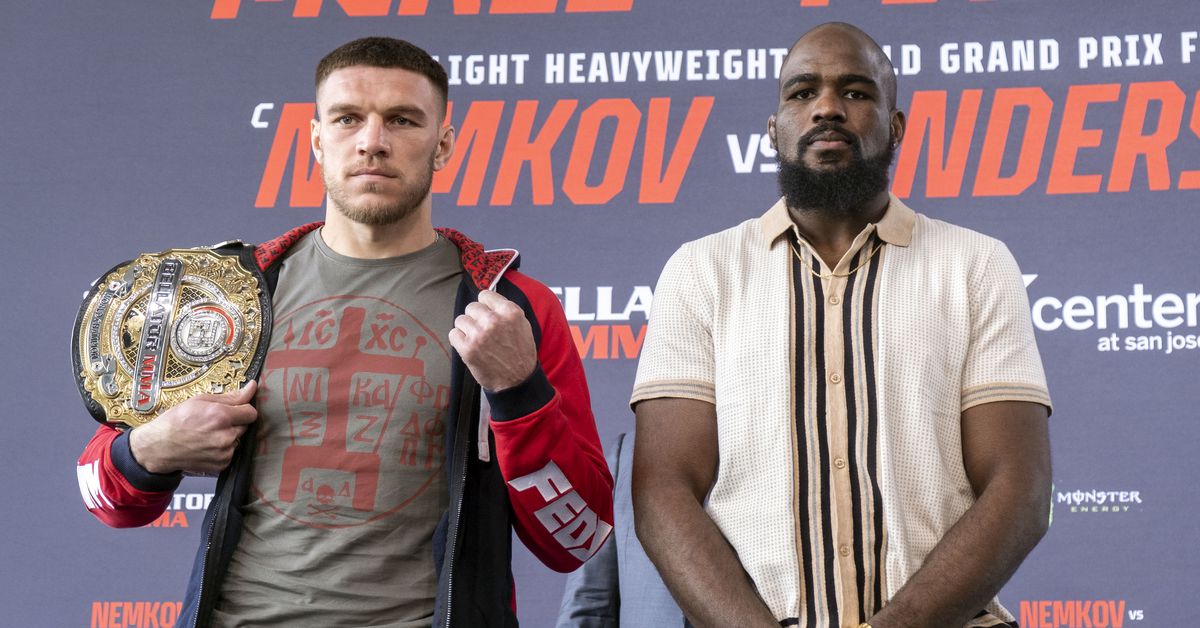 Bellator 288 will go down tomorrow night (Fri., Nov. 18, 2022) inside Wintrust Arena in Chicago, Ill., which will feature the Light Heavyweight Grand Prix finale between division champion, Vadim Nemkov, and Corey Anderson. In the co-main event, Patricky Pitbull will defend his Lightweight title for the first time against Usman Nurmagomedov.

In their first meeting seven months ago, the title fight ended in an anti-climactic manner after the fight was ruled a No Contest (NC) due to an inadvertent clash of heads with only four seconds remaining in the third round. While Nemkov started off great, Anderson was starting to take control and find his groove because it seemed as if the champion was slowing down a bit. Now, the two men will run it back one more time in what should finally bring the Grand Prix tournament, which started in 2021. Expect a lot of the same as the first, with Nemkov trying to come out aggressive. Anderson isn’t opposed to getting into a barn-burner but his bread-and-butter is wrestling. But being a sambo specialist, Nemkov is more than game to get into a grappling match. Now that they have spent some time locked in the cage together, they know what to expect from one another, so that means we can expect some changes from both men. In the end, I see Anderson doing just enough work with his wrestling to get the unanimous decision and go home with the title and a million-dollar payday.

After two straight losses, Patricky Pitbull bounced back nicely to win the vacant Lightweight title left behind by his broth, Patricio, by defeating Peter Queally at Bellator 270 via second-round technical knockout (TKO). His first challenge will be an immense one, however, because he will face undefeated (15-0) standout, Usman Nurmagomedov, who has been on a tear since making his Bellator MMA debut in April 2021. The younger cousin of former UFC Lightweight king, Khabib Nurmagoemdov, has won four in a row since joining the Viacom-owned promotion, earning three first-round finishes in a row in his last three contests. Pitbull wasn’t too convinced Nurmagoemdov deserved a shot at his title, but he has done enough to warrant the shot, like it or not. Pitbull would prefer to keep the fight standing, and while Nurmagomedov does have some decent striking, he will look for the takedowns early and often in order to show off the Dagestani wrestling that all of Team Khabib possesses. Nurmagoemdov has finished half of his opponents, so he isn’t simply about the “lay and pray” style of fighting, he goes for the jugular and gets it done. While Pitbull is far from a slouch, he will have a hard time keeping up with Nurmagomedov’s grappling.

Since 2018, Daniel Weichel has been a model of consistency, but it’s not exactly a great thing. That’s because he has alternated wins and losses over his last six fights in the span to accumulate an even 3-3 record. It’s a fall from his early days of success with Bellator, where he competed for the Featherweight title on two separate occasions against Patricio Pitbull, coming up short on both occasions. Since 2014, he has only been able tp score two finishes, including his first-round knockout win over Rob Whiteford at Bellator 281 earlier this year. His opponent, on the other hand, is undefeated at 11-0 and will be making his promotional debut. Of his 11 wins, Khizriev, has racked up three submissions and one knockout to go along with seven decision. He has a tough draw in his Bellator debut, but it’s a good chance to make a statement and put himself on the map right away.

Tyrell Fortune had his momentum stopped at Bellator 271 by losing a close split-decision to Linton Vassell. And though he did bounce back with a win against Rakim Cleveland, the loss was a brutal blow to his hopes of getting into title contention. He has a chance to build some momentum when he takes on Bellator newcomer. Daniel James, who is currently riding a three-fight win streak. A pro since 2014, James has been fighting in several organizations trying to build up his name and resume, including LFA, RFO and Victory Fighting Championship, among others. This will undoubtedly be the biggest test to date for him because he has the chance to take out the No. 5 ranked big man in the promotion in his first fight. I just don’t see it happening. He has nine knockouts to his credit, but Fortune is determined to keep climbing the ladder and make up some road he lost after suffering just the second loss of his pro MMA career.

Roman Faraldo has quickly become a fan-favorite and one of those guys that you simply have to see compete when he’s in the lineup. Since making his promotional debut two years, ago, Faraldo has been a human highlight reel, earning five straight knockouts win,s four in the very first round, including a flying knee knockout victory over 271. Undefeated at 8-0, Faraldo is on his way to become a legit future title contender in the Welterweight division where he is now ranked No. 10. He will be taking on Levan Chokheli, who has failed to find any sort of consistency during his short time with the promotion, racking up a 1-2 record. Prior to entering the Bellator ranks, he did have a 9-0-1 record, so he has proven himself to be a dangerous contender. He has a tough challenge against Faraldo, but it’s also an opportunity to make up some ground by upsetting the knockout artist. It’s just too much of a task to ask of him at the moment. While he does have a puncher’s chance. Faraldo’s is that much greater. I don’t anticipated a first-round knockout for Faraldo, but he will eventually get it done.

To check out the latest Bellator MMA-related news and notes be sure to hit up our comprehensive news archive right here.

Anthony Smith responds to Conor McGregor’s tirade: ‘He made my whole point by having this freakout’

Anthony Smith responds to Conor McGregor’s tirade: ‘He made my whole point by having this freakout’