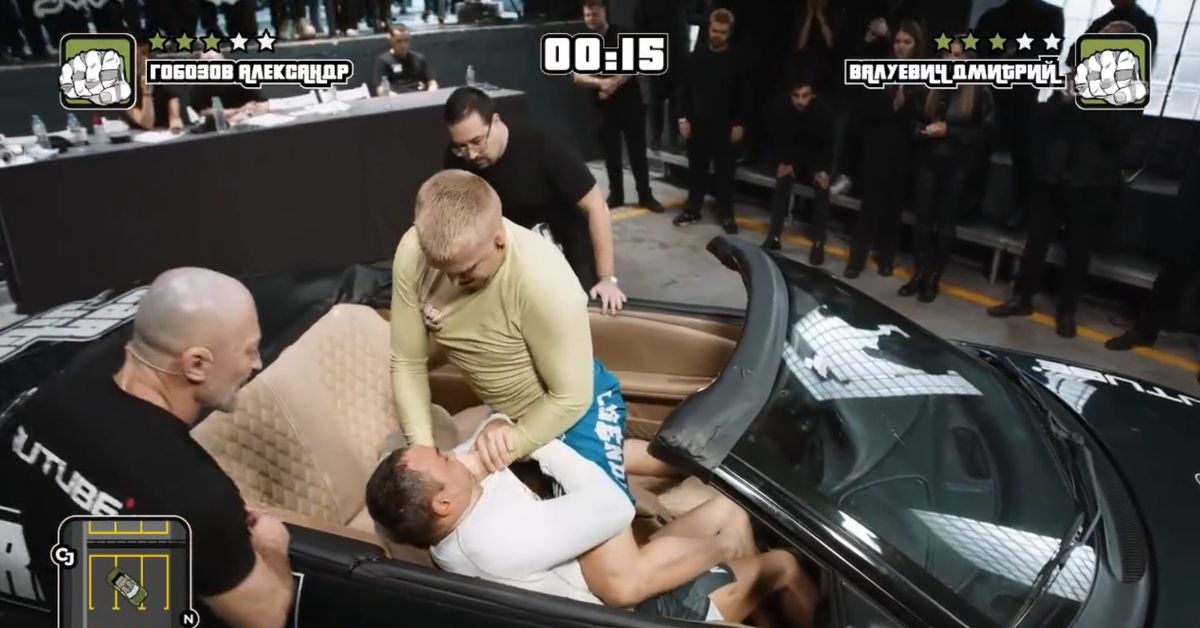 Welcome to the latest edition of Missed Fists where we shine a light on fights from across the globe that may have been overlooked in these hectic times where it seems like there’s an MMA show every other day.

But combat sports? Yeah, it changes all the time. Including Car Jitsu. Especially Car Jitsu.

(Big thanks as always to @Barrelelapierna for their weekly lists of the best KOs and submissions, and to @Grabaka_Hitman for uploading many of the clips you see here. Give them a follow and chip in on Patreon if you can.)

Listen, we would never encourage the use of foreign objects in a sanctioned fight, but when the apparatus you’re competing on is a foreign object itself, everything is fair game. Let’s just not start bashing guys’ heads into the window or anything like that.

If anything, that kind of innovation should be applauded. Think of it as the 2022 version of a young Royce Gracie choking people out with the gi. Except it’s a car seatbelt. Pretty much the same thing, really.

Besides, as always, when offensive maneuvers are developed, defensive counters are soon to arrive:

Watch more of the latest in Car Jitsu technology here:

Then again, there’s no substitute for traditional face-punchery, as evidenced by Joao Dantas and Carlos Bazan just throwing hammers at each other at Jungle Fight 112 in Sao Paulo this past weekend.

Dantas starts to pull away before finishing in the second round, but how about that heart from Bazan. This was a middleweighty middleweight fight worthy of the UFC octagon.

Admiring this super cut from @Grabaka_Hitman, I’m reminded that if Twitter truly does go away forever, the end of the Caposa account will be our biggest loss by far. No one on the bird site provides a more comprehensive look at the MMA landscape as a whole from week to week and, just as importantly, a history of this absurd business that we all love so much.

So click that link and pay your respects while you can and even if Twitter ends up sticking around for another 50 years, it’s never a bad time to tell someone you appreciate them.

And now, I dry my tears with this sick flying knee knockout by Marcos Degli.

You can watch a free replay of Jungle Fight 112 on YouTube.

CES MMA has been such a reliable feeder promotion for the top leagues that its titles are often up for grabs and the most recent beneficiaries of these circumstances are Mitch Raposo and Nathan Ghareeb, both of whom won belts on Thursday.

Raposo hasn’t had much luck pursuing his UFC dreams just yet as he picked up losses on The Ultimate Fighter and Dana White’s Contender Series. In both instances, Raposo was at a disadvantage as the natural flyweight competed in a TUF bantamweight tournament, and his Contender Series opponent Jake Hadley missed weight.

Back in a no-nonsense flyweight bout, Raposo took care of business, becoming the new CES flyweight champion with this one-shot bomb of Flavio Carvalho.

On the one hand (no pun intended), Raposo is probably talented enough to be in the UFC right now; on the other hand, letting him develop and spark fools on the regional scene isn’t a bad option either.

Ghareeb has just one loss in six CES appearances, a split decision loss to Dan Dubuque this past September, and he took to his title fight opportunity with gusto, finishing veteran Antonio Castillo Jr. with a Suloev stretch.

CES 71 is available for replay on UFC Fight Pass.

Speaking of fighters who had some bumps in the road in their UFC journey, Talita Bernardo has bounced back from an uneventful octagon run to go 3-0 since parting ways with the promotion. She beat current UFC fighter Lucie Pudilova and has been a standout with Invicta, recording back-to-back submissions including this sweet kimura of Katharina Lehner on Wednesday at Invicta FC 50.

Bernardo was thrown to the wolves to start her career and she picked up losses from Viviane Araujo, Irene Aldana, and Juliana Velasquez. Don’t be surprised if she captures Invicta gold and continues this strong surge.

And now, the Humpty Dumpty Fall of the Week portion of the evening.

It will be tough to top Kaua Fernandes’ effort from Shooto Brasil 112 (also available on UFC Fight Pass) as he left Felipe Pereira slumped against the cage.

This is probably what would have happened to Israel Adesanya if Marc Goddard hadn’t stepped in. Just saying.

OK, maybe not. But not bad for an amateur fight!

Also in amateur action, lightweight Rae Run Lee smoked Micah Lopez with a knee up the middle that left Lopez in an awkward pose afterwards.

That event, Brawl International 2 from Tumon, Guam, is available for free replay on YouTube.

Who had the best Humpty Dumpty KO of the Week?

Going back to UFC Fight Pass, let’s check in with Cage Warriors 146 for some good news and then some more good news.

Christian Leroy Duncan retains his title in dramatic fashion. In the final seconds of round one he TKO’s his opponent, in style

The sky is the limit for The Champ ☝️#CW146 pic.twitter.com/oBnKQuLawx

That is a sweet finishing combo.

With the win, Duncan became the first fighter to successfully defend the title since Nathias Frederick defeated Jamie Richardson in December 2020, a span of four different champions. Let’s see if Duncan can keep the good times rolling or possibly parlay his success into a call-up from one of the major North American promotions.

In the evening’s second title fight, we saw an unlikely new champion crowned.

You probably remember Wallhead, 38, from a few Bellator appearances at the start and end of the 2010s. He made a successful comeback with Cage Warriors this past July after a three-year hiatus and now he has an interim welterweight title around his waist.

This past weekend was a rough run for some notable fighters with the bad times continuing to roll for Dominick Reyes and Frankie Edgar going all the way out on his shield, but stories like Wallhead’s remind us that sometimes there are still plenty of good times to be had watching MMA.

If you know of a recent fight or event that you think may have been overlooked, or a promotion that could use some attention, please let us know on Twitter — @AlexanderKLee — using the hashtag #MissedFists.