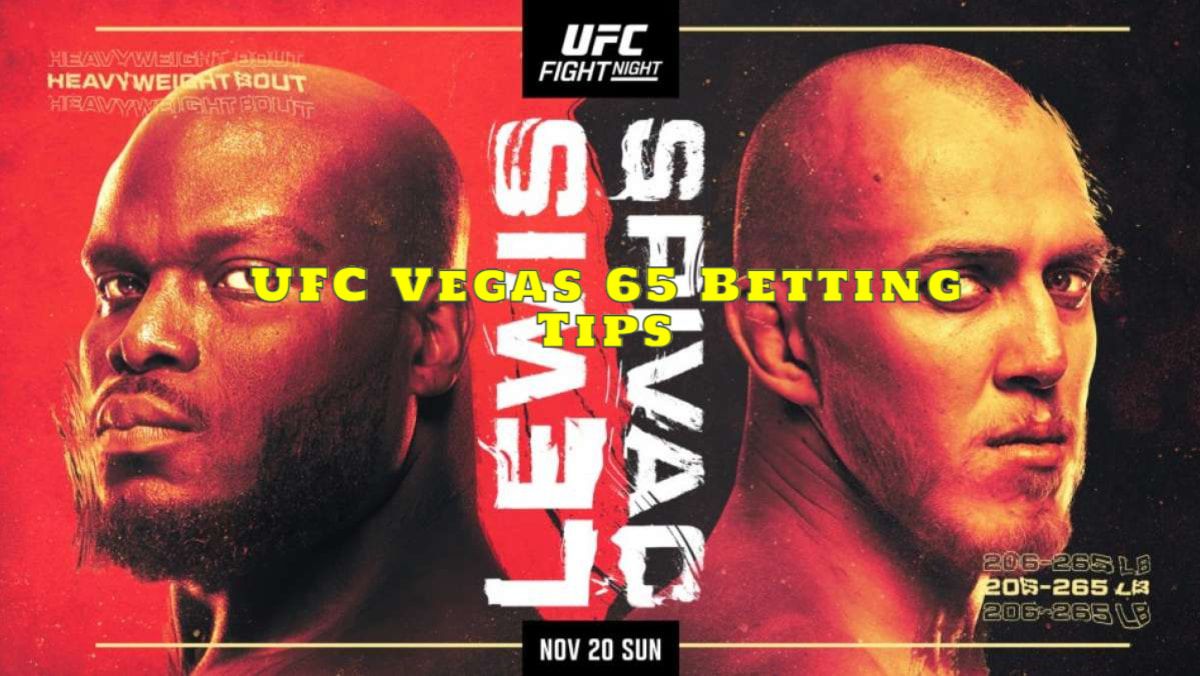 Welcome to our UFC Vegas 65 betting tips guide. This time, we head back to the UFC Apex as Derrick Lewis takes on Serghei Spivak.

It will be hard to top last week’s epic UFC 281 bouts, but there are some scraps on this card that may exceed expectations. UFC Vegas 65 looks to be a good one for some underdogs, so let’s see if we can pick them out.

In the main event, we have the two fighters in very different positions. Derrick Lewis comes into this one off the back of two losses. Both, although at the hands of top fighters in Tai Tuivassa and Sergei Pavlovich, were by knockout.

Spivak by contrast has stopped his last two opponents, using vicious ground and pound expertly. Averaging around four takedowns per 15 minutes of Octagon time, he is not an ideal opponent for “The Black Beast”.

That being said, Tom Aspinall did manage to catch Spivak, as did Walt Harris. Lewis is very much a live underdog though at a price of +162. It would be silly to say he isn’t. After all, no one in the UFC’s history has rendered more men unconscious than him.

The place I feel this one favors Spivak is his desire. Lewis has made it clear if he wins, he wins. If he doesn’t, then it’s all good, as long as he got paid. There is a good chance Spivak manages to take down Lewis, tire him and finish him late.

In the co-main event, the UFC chose violence. In the light-heavyweight division, there are very few matchups that could compete with Cutelaba vs Nzechukwu in terms of a guaranteed finish. Nzechukwu is favored at -170, with Cutelaba available at +140.

Nzechukwu is a tricky task on the feet, holding an eight-inch reach advantage over the Moldovan. Having stopped a guy like Carlos Ulberg on the feet, it is evident that he is a very good striker at least.

Cutelaba, though, is a handful. Having recently looked out of form, he has suffered multiple submission defeats in a row. This fight seems far less likely to end up there though, and I believe he has a real chance in this one.

The easy bet to make is for the fight not to go the distance at -300. For a riskier play, go Cutelaba to finish at +210.

Chase Sherman, now 4-9 in the UFC overall, tries to move to a two-fight win streak after beating Jared Vanderaa. He takes on Walder Cortes-Acosta, an 8-0 heavyweight, who took home a decision win most recently, against the unfortunate Vanderaa also. Almost as baffling as the matchmaking and card placement of this bout are what to bet.

While on paper Acosta looks like an easy pick, if you dig a little deeper, it’s not so simple. Sherman stopped the guy that Acosta went to the scorecards with and has gone the distance with better opponents than Acosta has ever fought. With neither a great option, we look to Sherman to be just a touch better.

Muslim Salikhov takes on Andre Fialho in what could be the sleeper fight of the night. Both men are returning from knockout losses after previously being on a decent roll. Salikhov though is 38. Fialho is 10 years his junior, and barring a few mistakes, has looked like a frightening prospect.

Salkihov has also taken a touch less time to recover from the knockout than his opponent when it is more time that should have been advised at his age. Fialho will get his chance to launch his famous left hook at an exposed chin, and it is hard to have confidence in Salikhov’s chin holding up.

Australia’s hottest prospect Jack Della-Maddalena is back in action following his liver-destroying performance over Ramazan Emeev. He takes on British Danny Roberts in what should be a wild affair. Emeev is also on Roberts’s winning résumé, albeit in a less impressive fashion.

Della-Maddalena will be viewing this as an opportunity to turn up the dial on his popularity. Roberts will engage in a stand-up battle and has been caught and put out a few times.

With Della-Maddalena at around -550, we will take him to win by knockout in the first +125. We also make a tiny bet on the fight to go the distance at +250. We haven’t seen Della-Maddalena out of the first round, so it is hard to evaluate how effective his striking is in the later rounds.

Charles Johnson gets a second attempt at a UFC win after taking on Mohammed Mokaev unsuccessfully. He fights Zhalgas Zhumagulov, who has had a rough ride in the UFC thus far. The fight not to go the distance is a staggering +150.

Both men have to win this bout and to ensure the win, you have to take risks. Johnson was given no chance to display the knockout power that got him to the dance against Mokaev. Make no mistake though, he has dynamite in his hands.

Miles Johns vs Vince Morales should be a fun stand-up affair. The pair are evenly matched, both physically and in terms of skill. In almost all measurable stats though, Johns comes out ahead. Morales is just more hittable, and we bank on the accurate Johns to cash in on that. John is to win by knockout at +300, and a small saver on him by decision at +200.

Brady Hiestand looks to record his first professional win over an opponent with a win on their record over DWCS alumni Ferne Garcia. It may surprise some to hear that I feel Hielstand is the play here.

Physically, he looks like a more imposing presence, and his experience on The Ultimate Fighter before losing in the finals to Ricky Turcios should stand him in good stead. Take him at -175, with a small shot on under 2.5 rounds at +140.

Feel free to let us know how you have been getting on with your own picks too over on Twitter.

Who is your lock of the week?

Heck of a Morning: Is Jan Blachowicz vs. Magomed Anakalev vacant title fight the right call for UFC 282?