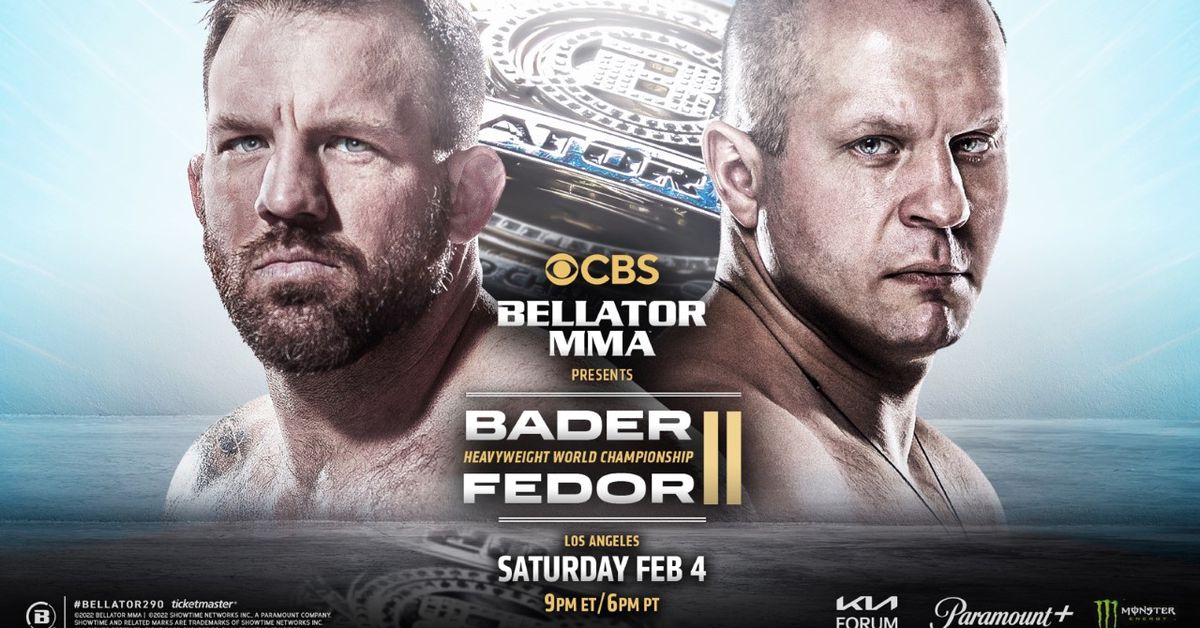 Bellator MMA’s network television debut is going to be a big one.

Officials today announced that Bellator 290: “Bader vs. Fedor 2” will be the promotion’s first MMA card to air on CBS on Sat., Feb. 4, 2023, after inking a deal with the network to air combat sports events moving forward.

Headlining the Bellator CBS fight card — which goes down from inside Kia Forum in Inglewood, Calif. — will be a heavyweight title fight as division kingpin, Ryan Bader, rematches longtime MMA veteran, Fedor Emelianenko.

From the press release:

CBS is no stranger to high-profile heavyweight fights.

“We have been working tirelessly on growing this brand into the global powerhouse it is today and a primetime slot on CBS has always been one of our key objectives,” promotion president Scott Coker said. “With a healthy roster full of many of the world’s very best fighters, along with elite up-and-coming prospects and legends of the game, I’m very excited to showcase this event on the most-watched network in America.”

In the first meeting between Bader and Fedor back in 2019, “Darth” starched “The Last Emperor” in 35 seconds at Bellator 214 to win the vacant title, which was also the Heavyweight Grand Prix finale (see it again here). Since then, Emelianenko has won two straight via first-round knockout, stopping Quinton Jackson at Bellator 237 before ending Tim Johnson’s run with a thunderous finish at Bellator 269 in Oct. 2021.

This will be Emelianenko’s final MMA fight, as he has previously gone on record to say he will retire after one more bout.

As for Bader, he has been up and down since that knockout win, racking up a record of 3-2-1, losing his Light Heavyweight title to Vadim Nemkov along the way. Furthermore, Corey Anderson eliminated Bader from the Light Heavyweight Grand Prix at Bellator 268 by knocking him out in the very first round.

Speaking of which, the winner of Nemkov vs. Anderson 2 will also compete at Bellator 290 as the champion will defend the 205-pound title against Yoel Romero in the co-main event of the evening. Romero is currently on a two-fight win streak, knocking out Alex Polizzi at Bellator 280 before steamrolling Melvin Manhoef at Bellator 285 earlier this year to earn the nod (highlights).

For more Bellator MMA-related news and notes be sure to hit up our comprehensive archive right here.