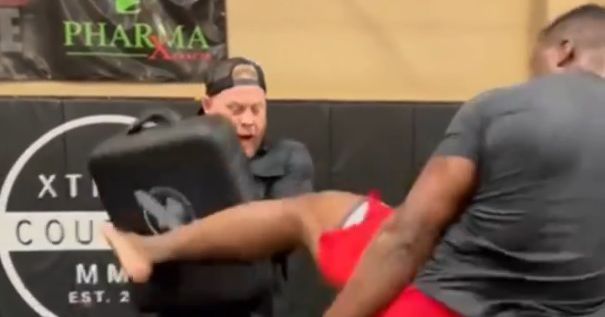 Francis Ngannou could be nearing the end of his road to recovery.

It’s been 10 months since fans last saw the UFC heavyweight champion in action as he has been on the shelf recovering from surgery he underwent to address a right knee injury shortly after successfully defending his title against Ciryl Gane at UFC 270 this past January.

On Thursday, Ngannou shared a video on his Instagram that featured him throwing kicks with his right leg with coach Eric Nicksick holding the pads.

Watch the footage below.

“Slowly getting back into kicking,” Ngannou wrote in an accompanying caption. “It feels damn good.”

In Ngannou’s absence, much discussion has floated around the possibility of an interim title being introduced with names like Jon Jones, Curtis Blaydes, and Stipe Miocic in the mix, but the UFC has not officially booked any heavyweight title fights for the near future. Ngannou has spoken about wanting to pursue free agency amid a contract dispute with the promotion.

Ngannou claimed the UFC heavyweight championship with a second-round knockout of Miocic in a rematch at UFC 260. He is currently on a six-fight winning streak.